This is not a debunking of the Bible, this is a realistic view of what the Bible stories are. If you believe the stories in the Bible are true you are living in denial of history and science among multiple other subjects. Remember, you need to prove the Bible inherrent before you can claim inherency.
xxxxxxxxxxx

At this point in our reading, famine has devastated the entire world and so the sons of Israel who are residing in Canaan are tasked by Israel (Jacob) to go to Egypt and get grain. We should remember here that the reason that Egypt has grain is testament to Joseph and his dream interpretation which was inspired by Jehovah. It should also be noted here that Jacob does not send all his sons, as he decides that his favorite Benjamin (who is filling in as proxy for Joseph) should not go. After all he does not want to lose his favorite child.....again.
"But Jacob did not send Benjamin, Joseph’s brother, with his other brothers, for he said: “Perhaps a fatal accident may befall him.”"

When the Israelite patriarchs arrive in Egypt they bow down to Joseph who immediately recognizes them as his brothers that sold him down the river to slave traders. This bowing down is also very important, as it is a clear fulfillment of Josephs dream in which his brothers bowed down to him, see Genesis 37.
"Joseph was the man in authority over the land, and he was the one who sold grain to all the people of the earth. So Joseph’s brothers came and bowed low to him with their faces to the ground."
interestingly this fealty that the brothers show towards the Egyptian empire would suggest that they were part of the Egyptian empire, yet no mention is made of this in the Bible. Probably because the Biblical time line does not fit into the time line when the Canaan area would have been under Egyptian control. 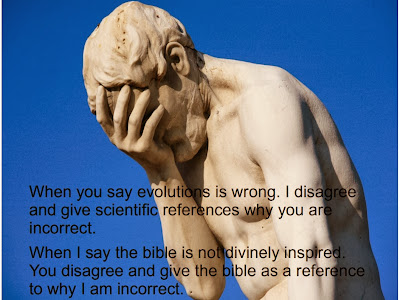 However, lets ignore the historicity of the Bible and continue the story.

Joseph decides that it will be a good idea to accuse his brothers of being spies and then put them in jail. I have no idea exactly why Joseph deemed this plan of action necessary, but I assume it is to get the brothers to  admit to their sins about Joseph to themselves.
"Your servants do not act as spies.” But he said to them: “Not so! You have come to see the vulnerable areas of the land!” At this they said: “Your servants are 12 brothers. We are the sons of but one man in the land of Caʹnaan, and the youngest is now with our father, whereas the other one is no more.”......... As surely as Pharʹaoh lives, you will not leave this place until your youngest brother comes here. Send one of you to bring your brother while you remain in bondage. In this way, your words may be tested out to see if you are telling the truth. And if not, then, as surely as Pharʹaoh lives, you are spies.” With that he put them together in custody for three days."
After three days in jail, Joseph then goes to his brothers and says they can go back to their father with the grain. but, they can only go if they leave one brother enslaved and bring back to him the younger brother Benjamin to prove that their story is correct. This essentially is the way that Joseph is going to verify their story about no being spies, but in reality it is his way to see his brother Benjamin.
"Joseph said to them on the third day: “Do this and live, for I fear God. If you are upright, let one of your brothers remain in bondage in your house of custody, but the rest of you may go and take grain to alleviate the famine in your households. Then bring your youngest brother to me, so that your words will be found trustworthy and you will not die.” And they did so. And they said to one another: “We are surely being punished on account of our brother, because we saw his distress when he begged us to show compassion, but we did not listen. That is why this distress has come upon us.”"
Upon an agreement of sorts, Joseph keeps Simeon in bondage while the other brothers are allowed to return to their father. Interestingly, Joseph also sent their money for grain back with the brothers. However, this they only found out that their money was returned to them on their journey back. This the brothers rightfully perceive as a problem, after all Joseph is so rational as to randomly accuse them of spying.  They are thus fearful that if they go back to Egypt they may get accused of stealing the money which was not in their possession in jail anyways. Okay, so this is a massive plot hole, but hey its the Bible so insert magic explanation that makes no sense.

Finally the brothers make it back to Canaan and their fathers house. On arrival the brothers relate the story of their trip and jail time to Israel. It is here that we see even more how screwed up this family is.
"Jacob their father exclaimed to them: “It is I you have bereaved! Joseph is no more, and Simʹe·on is no more, and you are going to take Benjamin! It is upon me that all these things have come!” .............. However, he said: “My son will not go down with you, because his brother is dead and he alone is left. If a fatal accident should befall him on the journey you would make, then you would certainly bring down my gray hairs to the Grave in grief.”"
So Jacob (Israel) is giving up on his son Simeon to what would certainly be death if Benjamin is not brought to Egypt. He is not even prepared to take the trip himself to Egypt to plead for his son! Remember, this is the family that is blessed by Jehovah as being an upright and loyal family.

Not sure how much of this crap one can believe or tolerate until you see the woods for the trees. Either the Bible is a fairytale, or the God of the bible is a tyrant that you serve. Its your choice, make it well.