I have a confession to make, I may have been wrong about the #blacklivesmatter movement. But wait, before you run away and think another mind lost to the regressive left, let me clarify that my opinions have not changed I just think that the movement may have a place in the conversation albeit not in the way it was intended. 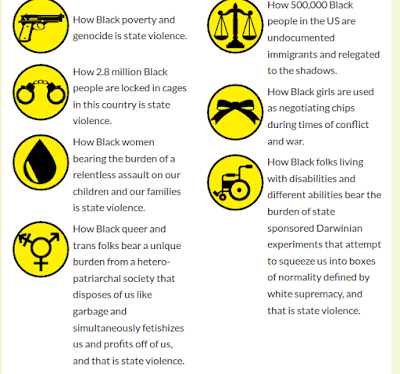 Screenshot from blacklivesmatter.com (Source)
Now, when the movement says that "2.8 million Black people are locked in cages in this country is state violence." We are now able to look at crime statistics and observe that while it is true that a far larger proportion of the black population in the US is incarcerated, a far larger portion of violent crimes in the US are conducted by the black population (2012 statistics, 2013 homicide statistics). As such one would expect this higher rate of incarceration. This means we need to understand why this crime rate exists and not blame it on racism, after all the cause of crime cannot be racism as that would imply then that the perpetrators are racists committing crime against a particular race group.
Then there are the bizarre claims, such as "How Black folks living with disabilities and different abilities bear the burden of state sponsored Darwinian experiments that attempt to squeeze us into boxes of normality defined by white supremacy, and that is state violence" which are horrific if true. But, I think to say state sanctioned "Darwinian projects" that are governed by "white supremacists" needs to be proved. If this is true then I think we can all agree that similar to Hitlers anti-semitic atrocities, there will be not many people that condone it. But, such a large claim bears a large burden of proof. Needless to say this goes for many of the other claims presented.

So, what is the way forward? That is for the organization to decide, but it needs to bear the burden of proof if it is making these very bold claims. There are claims here that sound outright outrageous, then there are claims, that are demonstrably flawed but raise issues that need to be addressed.  I am of the opinion that we should invest in society and as such there are claims made by blacklivesmatter I would gladly embrace and fight for. However, before I can stand against such tyranny I need to see the evidence for such bold claims, I cannot accept these claims based on nothing.

Now, I am sure there are people who believe that the evidence for these horrible crimes can never be presented, as there is some grand conspiracy in place which is hiding all the information. To this I have the following to say, if you hold this view you are a conspiracy theorist. Just consider that the US government could not hide a blow job in the White House, then there are the Pentagon papers, Wikileaks, and other hacks that always get the information.

In closing, I am glad that the movement exists, as it is making a reality of societal problems that need to be addressed. Unfortunately, it is not the problems that blacklivesmatter wants us to assume exists.
Posted by Christian at 11:00:00