One of the common arguments used by theists is that atheists cannot comment on their holy book as we have not read their holy book or are taking parts of their holy book out of context. This usually comes about when an atheist says your deity cannot be good because of verse x line y, or an atheists asks a theists to explain what their god meant when they inspired someone to write something in their holy book. The thing that theists need to understand is that most atheists have read various holy books in full. I for example have read the Koran, Dianetics, The Bible, The Biblical Apocrypha, The Baghvad Gita and the Unpanishads. (For the Unpanishads specifically the Oxford edition.) Hell, I have even read some of the so called mysterious Nag Hammadi library. Now, I don't say this to boast I say it to show you that I have read a few holy texts. So when I comment on your holy book please don't say to me, "You have not even read the x", as chances are I have.

With this background let me delve deeper into what I want to complain about to any theist that reads this today. I can sum up my complaint like this, "I am not here to explain your holy book to you." Yet when I am debating theists it seems that is what I have to do half of the time. This is an extremely frustrating as I would expect you to know your source material at least as well as I do. After all, you believe it and take it as fact but you cannot even reference it correctly and realise where the errors are. I would expect any theist to have counter arguments for errors in the text or to be able to point me to another portion of the text where it explicit states that this is what is meant in the source and it is not an error. Yet, this never happens so let me elaborate more with two examples.

The first example comes from the bible. In the new testament (NT) the Council of Jerusalem decides that only certain old testament (OT) laws are applicable to the Christians, specifically they mention the laws that govern sexuality among them. Interestingly, this was man that decided this and not Jesus as Christians would like you to believe.
Acts 15: 28-29 For it seemed good to the Holy Ghost, and to us, to lay upon you no greater burden than these necessary things; That ye abstain from meats offered to idols, and from blood, and from things strangled, and from fornication: from which if ye keep yourselves, ye shall do well. Fare ye well.
This means you must follow anything which involves sexual laws in the OT, that means marry the rapist, no sex during the period, kill a father who sleeps with his daughter in law, kill homosexuals, having sex with your dead brothers wife if she has no children (You have to its law), etc etc. This is what the Council of Jerusalem means, I shouldn't need to explain it to you. f you are looking for wriggle room on your religion, maybe you need to get rid of it and become rational. So no, Christianity is not the religion of love.

(Source)
The second example comes from the Koran and the following fun verse.
Surah 9:5 Then, when the sacred months have passed, slay the idolaters wherever ye find them, and take them (captive), and besiege them, and prepare for them each ambush. But if they repent and establish worship and pay the poor-due, then leave their way free. Lo! Allah is Forgiving, Merciful.
This means you are meant to kill everyone that is not a Muslim. Please realise I am not taking this verse out of context, it says explicitly that you must "slay the idolaters wherever ye find them." It is very dishonest of you to say an atheist is taking these words out of context as the context is clear. In fact the verse before and after this are basically telling believers that unbelievers are scum and not to be trusted as they owe believers a debt. So no, Islam is not the religion of peace. 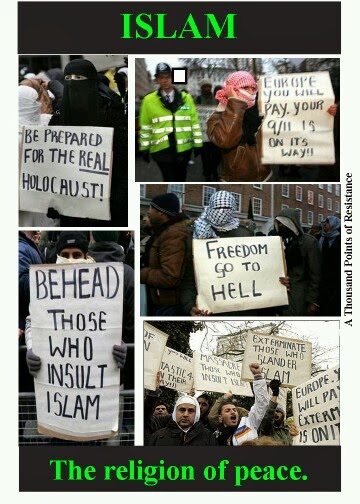 Remember theists, atheists know your source material and we even have handy guides like the one I used abundantly in this post. Maybe you should be using these versions of your holy book instead of your version at home, as they are annotated and explains what the verses actually mean and not what you want them to mean. Don't expect us to back away and not attack your holy book just because we are atheists, if you cannot defend your book then maybe its not worth defending.
Posted by Christian at 13:00:00

Email ThisBlogThis!Share to TwitterShare to FacebookShare to Pinterest
Labels: bible, Koran, Theism
I read it, I reread it, I re-reread it etc.
2013-10-13T13:00:00+09:00
Christian
bible|Koran|Theism|
Newer Post Older Post Home