Did you know that the Koran tells us all about human embryonic development? Did you know that this information was in the Koran 1400 years before science worked it out?  I am guessing you didn’t know this after all, its not true in any way or form. According to the pseudoscience scienceislam website however this is all hard cold fact. Interesting that the Koran had all this information yet never shared it with the science community until after the discoveries. Its as if they are lying and filling in the gaps after the fact, but I am sure the words and figures in the Koran will clarify this for us.

Here is the Koran explaining in detail the human embryonic development.
23:12 Verily We created man from a product of wet earth;
23:13 Then placed him as a drop (of seed) in a safe lodging;
23:14 Then fashioned We the drop a clot, then fashioned We the clot a little lump, then fashioned We the little lump bones, then clothed the bones with flesh, and then produced it as another creation. So blessed be Allah, the Best of creators!
Not very scientific as this does not explain anything about a very complex process. A process which is summed up very differently by scientists and for which I would have to produce a book to explain in detail. (cool link)

So how do they make this absurd claim? Apparently the word seed above is the Arabic word "alaqah" which means either leech, suspended thing or blood clot (conveniently three definitions). Either of these words then can get twisted in various ways to describe an embryo in its beginning stages. But I guess they forgot verse 12 where man is a product of wet earth (mud). Also why would god not just use the word embryo and leave the whole mud thing out? These assumptions that are made about this word are ridiculous and the leaps of logic amazing. Here is my favourite one of them.
The second meaning of the word alaqah is 'suspended thing'. The suspension of the embryo, during the alaqah stage, in the womb of the mother very appropriately fits this description.
BTW the embryo is not suspended its embedded in the wall of the uterus during the initial stage.

But its not over yet, this gem arises in the next paragraph.
The next stage mentioned in the verse is the mudghah stage. The Arabic word mudghah means "chewed-like substance." If one were to take a piece of gum and chew it in his mouth, and then compare it with the embryo at the mudghah stage, we would conclude that they would be almost identical because of the somites at the back of the embryo that 'somewhat resemble teeth marks in a chewed substance.'
And now we know that this is someone who has no fundamental understanding of biology let alone science and rational thought. If you call it the word then obviously it matches what you want to see, again Allah could have just used the proper terminology. Also what the hell is the mudghah stage in embryonic development?

The article then goes on to explain how awesome Muhhamed is for knowing all this before scientists. Uhhhhm no he didn’t, He said humans came from mud and what about the little issue of fertilisation? Keith Moore the embryologist agrees that the Koran is correct with its analysis of human embryonic development. All I can say to that is thankfully he is retired. Even if Keith Moore was the most respected embryologist in the world I would still not trust this bad science theory as it is obviously flawed. 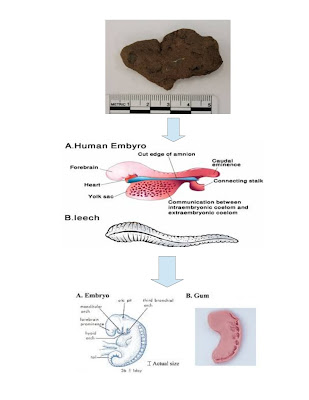